Sleep Awareness As We Prepare To Spring Forward 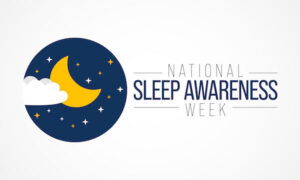 It’s not your imagination if you feel more tired after you “spring forward” in March. Daylight savings time begins on March 13 this year at 2 AM, meaning once you go to bed for the night, you lose an hour of sleep. Coincidently, Sleep Awareness Week also occurs the week of March 13th through the 19th. Although there are benefits such as longer daylight and the anticipation that spring and summer are on their way, it can take a toll on your mind and body. As daylight savings time (DST) approaches, it’s important to understand the effect it can have on a person.

Sleep is an extremely important aspect of living a long and healthy life. Launched in 1998 by the National Sleep Foundation (NSF), Sleep Awareness Week is an educational campaign focused on encouraging the public to prioritize sleep in order to promote health and well-being. Over 35% of adults in the United States report sleeping less than seven hours a day. This can lead to mental fog, lack of awareness, mood changes and an overall feeling of lethargy as well as being less productive. In order to gain the most out of each day, and live life to the fullest, it’s important to get quality sleep every night and DST doesn’t help any!

According to the American Academy of Sleep Medicine (AASM), 55% of U.S. adults said they feel tired after the spring daylight savings time change. Another study by cell.com also notes that “28 fatal accidents could be prevented yearly if the DST transition was abolished” based on the fact that the spring daylight savings time transition “acutely increases fatal traffic accident risk by 6% in the U.S.”. That being said, there are steps you can take to help minimize the impact of the loss of sleep. The combination between sleep awareness week and DST is the perfect opportunity to understand the fundamental importance of a good nights rest. According to health.gov, the following are benefits of getting enough sleep:

Not only does quality sleep help you to feel better but it also increases a persons’ overall mental perception and awareness, many times leading to a better quality of life and satisfaction. In terms of things to consider when contemplating your own sleeping behaviors and patterns, remember, that many adults in today’s society have issues sleeping because of stress, medication, caffeine or other untreated disorders. If you have sleeping issues, it’s best to address your concerns by talking to a professional.

Beyond sleeping issues and the effects it has on the body, being mindful is important. Think about the following:

As we’ve mentioned, DST plays a role in our sleep habits and although it only happens twice a year, it’s important to prepare for it. Here are a few tips:

Sleep is just one component of living a long, healthy life. There are numerous other factors that play a role in a humans lifespan including family genes. Though there are things that we cannot control, those we can control should be taken seriously, especially if aging in place is important to you. Attempting to get enough rest is something to focus on so be conscious of your sleep patterns and habits as you prepare to spring forward. For more information on sleep awareness week visit NSA.