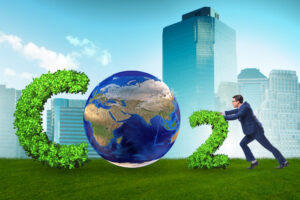 Global atmospheric carbon dioxide concentrations (CO2) today are higher than at any point in at least the past 800,000 years! Is that a bad thing? Yes!

There is a lot of buzz about CO2 on the internet and its harmful impact on the environment. People know it as a greenhouse gas (a gas that absorbs and radiates heat) which is the primary contributor to rising global temperatures. Carbon dioxide is a colorless and odorless chemical gas composed of two oxygen (O) atoms and one carbon (C) atom. Emitted by cement production, deforestation as well as the burning of fossil fuels like coal, oil and natural gas, rising levels of CO2 are not only hazardous for the environment, but they can also pose many health dangers for us.

Below are some of the biggest risks of high levels of CO2.

Asphyxiation
As we all know, oxygen is significant for all humans, and without it, life is impossible. But CO2, when released in an unventilated area, can lower the levels of this life-giving oxygen to dangerous levels. This is known as asphyxiation, or a state wherein the person faces difficulty breathing and feels like they are suffocating, which can result in unconsciousness or even death.

The common symptoms of asphyxiation are:

Stinging sensation
If someone inhales carbon dioxide in higher concentrations, they start feeling a stinging sensation in their nose and throat, along with a sour taste in the mouth. This happens because the carbon dioxide gas dissolves in the mucous membranes as well as saliva and forms a weak solution of carbonic acid.

Loss of energy and concentration
High levels of CO2 can also trigger severe headaches and make people feel exhausted, which further weakens their ability to concentrate. This can lead to dizziness and increased heart rate.

How to prevent CO poisoning?
To keep all the dangers of CO2 at bay, make sure that all your vents are clear. Nothing should obstruct the vent for your stoves, fireplaces, dryer, or furnace. You should also prevent snow from building up and blocking the exits for these poisonous gases. As proper ventilation is key to avoiding poisoning, you should never start a car, run a generator, or fire up a grill in closed areas, like basements or garage. And if you have a wood-burning fireplace or stove, you should clean it regularly so that the flue works properly. Even when the last embers are smoldering, keep the flue open so that the gases escape.